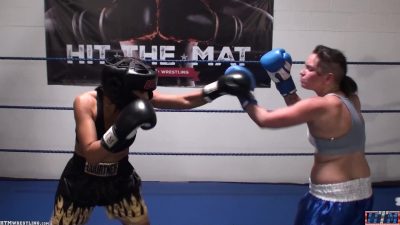 Here we have Courtney, a former Golden Gloves competitor, vs. Devon D’Amo, a fetish wrestler/boxer who has had some training with former champion Hollie “Hotstuff” Dunaway.  At the beginning of the video both girls introduce themselves to the camera

Devon starts us off talking about how she is going to box new girl Courtney.  She just met her and isn’t intimidated by her, which brings a smile to Courtney’s face.  Courtney then introduces herself, stating how much she is ready to get into the ring, and that Devon doesn’t know who she is messing with.  The confidence on her face shows she is not afraid of what is about to happen.

Courtney is decked out in her gear shadowboxing, throwing quick combos.

Devon is also shadowboxing, getting her body warmed up for the battle to come.

Courtney starts off jabbing, giving Devon different angles to deal with both high and low. Mixing up head and body punches.  Devon does well covering, as she throws counter punches in return. Early on Devon walks into a left jab right in the nose. Courtney shows a lot of good defense picking off Devon’s punches in her guard, and moving her body.  Courtney seems content catching Devon, as she walks in, with straight jabs or crosses.   Devon is not afraid to throw punches trying to break Courtney’s guard, but Courtney seems content moving/blocking.  This is a feeling out round.  You can see how both girls are trying to find the openings they can use to exploit. The round ends and both girls go to their corners ready for the next round.

Devon does something quiet unusual and takes off her headgear.  Now I knew it is because she was feeling overheated, but I surmise that Courtney may have taken it as a sly insult that she didn’t respect her skills

Both gals come together to touch gloves and the round is on. Courtney comes forward a bit more aggressively with combos.  Devon barely avoids taking a few hard rights, as she moves out of range a few head shots.  Courtney starts to work the basics jabbing high and low pushing the action, trying to find an opening.  Devon starts to push the action with more punching trying to break through Courtney’s defense.  However, Courtney waits her turn and stiff Devon with a jab to her nose which throws her off her game, but teaches her to keep her gloves up in front of her unshielded face.  They continue to circle each other, and now it is Courtney’s turn to be on defense as Devon starts throwing punches. This tactic is short lived as Courtney starts moving her hands to upset Devon’s plans. Another issue Devon faces is her hair, now free from headgear, flies in her facing making it harder to defend against Courtney. The round ends with Devon taking a body head combo that has her glad I called time.

This round has both girls trading jabs in the middle of the ring. Until Courtney opens up with a quick flurry that has Devon covering and circling out of the way. Devon is showing a bit of fatigue with her mouth open trying to catch her breath.  Courtney tightens her guard and throws a bit faster than before, which makes Devon do the same in response.  If Courtney gains more steam, she may steamroll Devon.  This round has them fighting much closer than before.  I am guessing that weariness is making mobility a bit more difficult.  Devon is turning red from exertion.  Devon appears to be trying to focus on keeping her hands up, and throwing a punch when she thinks she can land one.  Courtney, on the other hand, seems to be maneuvering Devon into positions to lay gloves on her.  Courtney manages to slip in some good body work to try and take the wind out of Devon’s sails.  Not to be denied Devon catches Courtney coming in with a hook to the side of her head. Devon seems to be fading as she eats two big rights hands one right after the other, and almost makes it 3, but her head dips out of the way!  Devon catches Courtney again coming in, and Courtney unloads on her throwing combos backing Devon to the ropes and down to one knee for the first knockdown of the fight.  By the count of 5 Devon is back on her feet ready to rumble.  Courtney jumps on her, but the bell ends the round.

In the corners Devon sits down banging her gloves, and breathing heavy trying to get her breath back under control.  In contrast Courtney seems calm and relaxed and ready to get the next round started.

At the start of the round Devon is a bit more defensive as Courtney opens up with stiff jabs, and a few right crosses trying to jump on the momentum built up from round 3. Another burst of head and body punches force Devon to cover up and retreat. Devon moves and re engages but she keeps her left hand to low and Courtney finds a home for that right hand to her jaw. To her credit, after she regains her composure Devon comes back throwing punches trying to get her game plan working.  There are a few good mix ups in this round, showing Devon’s heart vs. Courtney’s skill.  Devon takes another clean right hand on the jaw, and you can see the frustration on her face. Devon comes in right hand cocked back; you can tell she wants to dish out some glove love on Courtney’s face. Try as she might Courtney has other plans, such as working her body over when Devon covers up. Courtney uses her jab wonderfully to set up her right, and in one instance catches Devon on the side of the head while against the ropes, sending her down for the 2nd and final time in this match.  A 10 count comes as Devon stays down, I presume knowing only more punishment was yet to come.

Even though she got knocked out, Devon seems to be in high spirits. Devon gives Courtney credit for being a good boxer.  She then lists her training with “Hotstuff” Hollie Dunaway, and how much the heat in the ring affected her performance.  She stated she knew she was in trouble in the 3rd round after the first head punch.

Courtney doesn’t even look like she was sweating (She may have cleaned up during the other interview) .  She believes she could have done better than a 4th round knockout, and she should have knocked her out in the 1st round.  Courtney wanted to do a rematch, but sadly that never happened.

Check out the video here!